I'll be doing a lil giveaway for some of the items that i originally thought of holding onto but they pretty much ended up in my shelf, neglected again ><. Thus having this small giveaway to find some new owners for them who would prolly appreciate them much much more than i do. :)

THINGS TO NOTE BEFORE COMMENTING
- I will only open this giveaway to anyone in Singapore.
- Leave a comment with your name & email address only, there's no need to choose a giveaway.
- Please do not use multiple accounts to comment. (Give others a chance as well m(_ _)m )
- I'll be using a number generator to select the winners randomly.
- Giveaway dateline will be 31st May 11:59pm local time.
- Goodluck~! :) 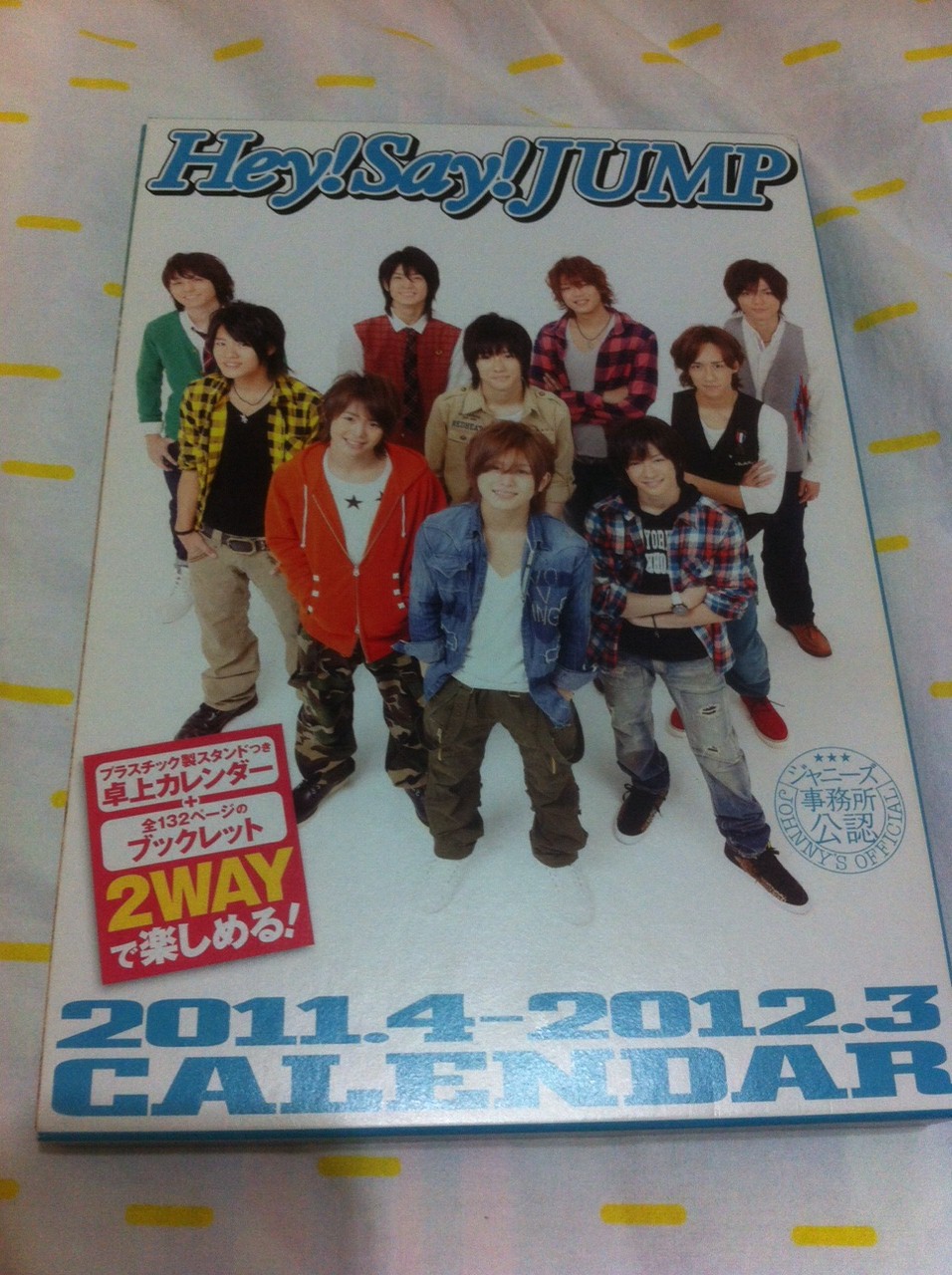 Giveaway 2
A bunch of mixed clippings, posters & glossies raging from 2007-2012.
(I didn't have any other files to keep them so i used the file that i used previously)
Calendar 2012-2013 trading cards 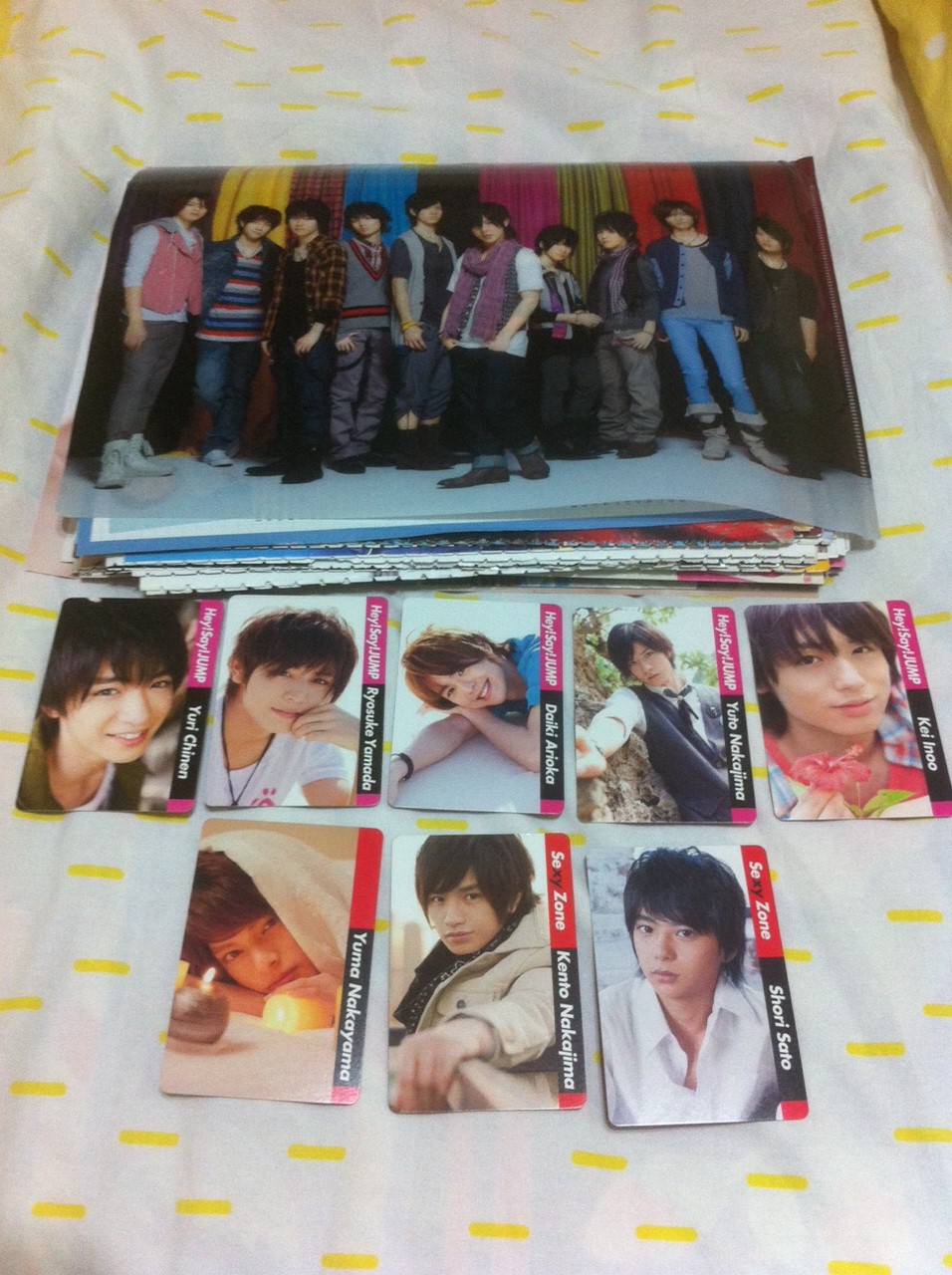 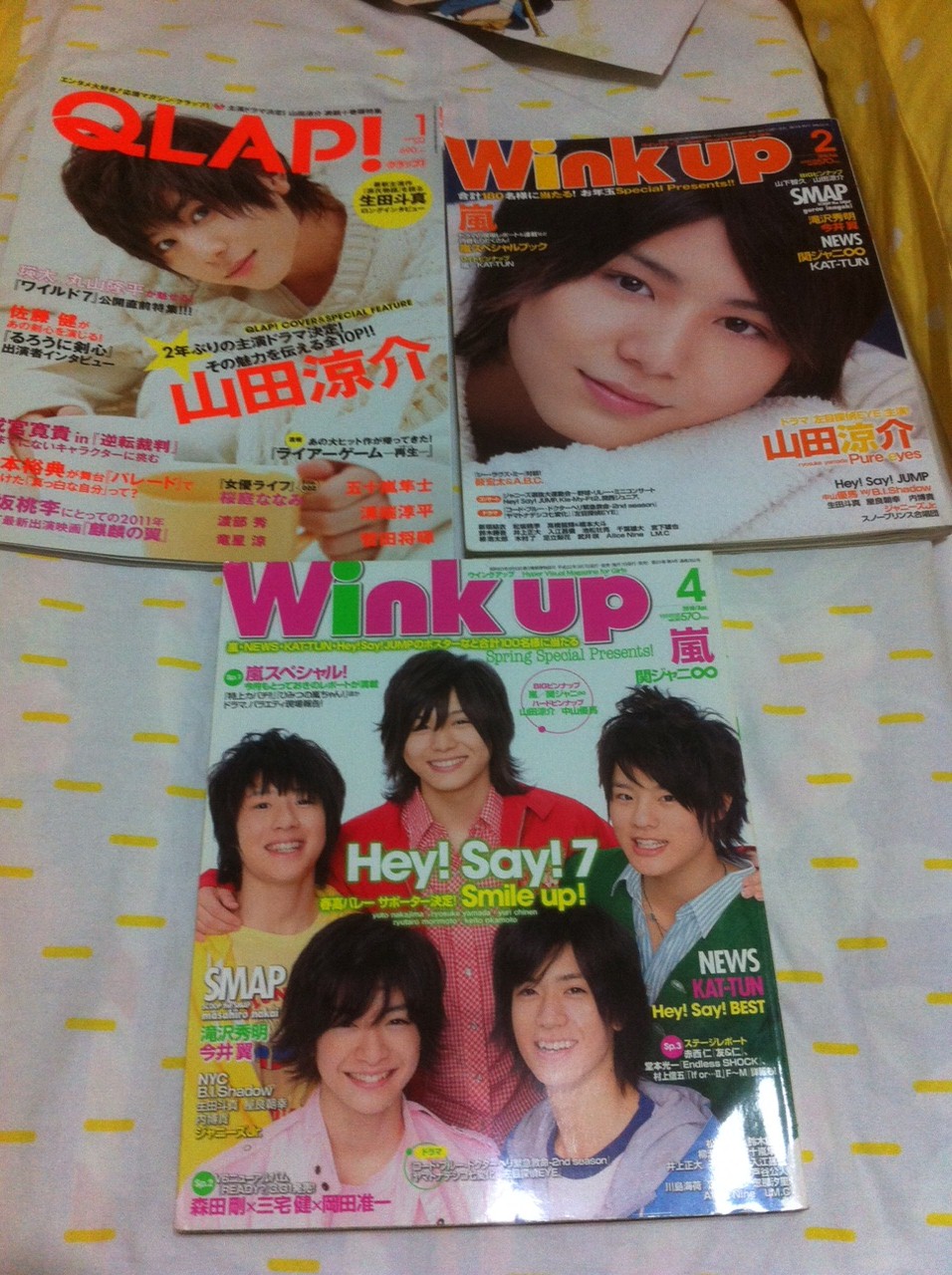 Things to note before purchasing items


Feel free to ask for a clearer picture or anything else about the item (condition etc) :)b
*For those who choose to pm me, please change pm settings before sending me any pm or else i wouldn't be able to reply ><. Recorded my own version for it and a big thanks to

atiqah2chan for giving me her code since my singles aren't here yet.

Title: Mine
Author: anmeke
Pairing: Morimoto Ryutaro x Shimazaki Haruka
Rating: NC-17
Summary: He couldn't help himself, he was jealous and he knew he had to make her... his.


A/N: I got this idea when i saw the roleplaying accounts on twitter so please don't kill me TAT Got my calendar today and decided to share with everyone the scans (only because my friend wanted it as well OTL)
Scans includes everything in the calendar including Inoo, Yuto and Daiki's trading cards.

Please direct back to this post if you wish to share it at any other sites.
Do not reupload again for download.
Credits very much appreciated. :)

"ugh!"Keito groaned as he felt something penetrate him. A moan was heard behind him as he hung his head low in shame. Why was he still doing it? And worse of all, behind the back of one person. Not that he actually mind since after all, the one with him now was someone he truly admired.

"YA... YABU KUN!" More moans filled the room as the two grown man continued to move their hips in rhythm. "Faster... Fast.. Faster!" Keito held onto the bedframe for more support while Yabu continued thrusting inside him from the back. As Keito was nearing his climax, a flashback hit him.

Okamoto Keito and Morimoto Ryutaro seemed like the most respectable couple in the group of 10boys. They were nothing but pure innocence. Keito has always looked up to Yabu Kota as role model. He admired him for everything he lacked. Unfortunately, that admiration soon turned to love.

He spent most of his time with Yabu instead, leaving his boyfriend upset. "Ne, would you want to stay over tonight?" Keito knew where this was going. He knew it was wrong. He knew the things he, THEY, were going to do would only break someone's heart. "Sure, I'll see you tonight"

With a final thrust, Yabu filled Keito up till some of his love seeds spilled out. As he pulled himself out Keito spoke "This is wrong". Silence filled the room which soon led to an awkward air. Yabu wrapped his arms around Keito and kissed the tip of his nose when a phone vibrated.

Guilt took over Keito's emotion and he let out a silent sob. Yabu knew the reason why but could only stay silent and continued hugging him.

Minutes felt like hours as Yabu decided to speak up "What's done is done. There's no turning back now. We can only continue what we're doing as telling the truth would only hurt him more." Keito took awhile to absorb what Yabu just said and nodded his head slowly. He loved Yabu but Ryutaro was important to him too. He wouldn't want to see Ryutaro hurt and that meant keeping this a secret. "This will be our sweet escape and no one shall know about this." Yabu's voice was muffled as he went to sniff Keito's neck. Keito still felt very guilty and could only mumble "yes.. Our sweet escape.. and no one should know.. Especially him.."

Managed to record Super Delicate preview on ZIP! this morning :)
I woke up early just to catch this LOL!
Im not sure if it'll get deleted anytime soon but..  That's the best name I could give OTL

electricdruid at The fiasco continues

ACTA in a Nutshell –

What is ACTA?  ACTA is the Anti-Counterfeiting Trade Agreement. A new intellectual property enforcement treaty being negotiated by the United States, the European Community, Switzerland, and Japan, with Australia, the Republic of Korea, New Zealand, Mexico, Jordan, Morocco, Singapore, the United Arab Emirates, and Canada recently announcing that they will join in as well.

Why should you care about ACTA? Initial reports indicate that the treaty will have a very broad scope and will involve new tools targeting “Internet distribution and information technology.”

What is the goal of ACTA? Reportedly the goal is to create new legal standards of intellectual property enforcement, as well as increased international cooperation, an example of which would be an increase in information sharing between signatory countries’ law enforcement agencies.

Say NO to ACTA. It is essential to spread awareness and get the word out on ACTA.

Hello :))
The purpose of posting this is pretty much what the title says.
Most of you would know by now that Hey!Say!JUMP would be having their first Asia Tour in 5 countries (Hong Kong, Taiwan, Japan, Thailand, Korea)
Many fans are planning to go over to one of those countries just to watch Hey!Say!JUMP but at the same time, there are also lots of fans who would not be able to watch the concert.
By trying to get JUMP to Singapore, we hope that more fans would be given the chance to watch JUMP.
Not only Singaporean fans, but also fans from neighboring countries like Malaysia and Indonesia.


WHAT IS TO BE WRITTEN IN THE POSTCARD?
- Reasons why it should be held in Singapore Example: Convenience, cheaper, safer, etc (Of course, it's only an example)

- Impression of Singapore (If you're not sure, you can try asking fans from Singapore on this to get a rough idea)

- You could add in a lil few things. Let's say, how much you want to see JUMP etc.

WARNING : No bashing of other countries.


WILL IT BE IN ENGLISH OR JAPANESE?
- It will be in Japanese, so people who are able to help translate would very much be appreciated. Do email what you want to write first so it can be translated before sending the postcards.


WHAT TYPE OF POSTCARDS?
- Any postcards will do :)) If you have postcards from Singapore, that will be good too


WHERE DO I SEND IT TO?
- Addresses will be emailed to you. For now there are representatives from Singapore(me) and Indonesia (@erenadesu / yuya.daisuki@yahoo.com) who will help to collate the postcards. Do send to the right representative ^^ As for fans from other countries, for now you'll be sending it to Singapore.


WHAT HAPPENS TO THE POSTCARDS AFTER SENDING IT?
- There will be a deadline for this as all the postcards will be compiled and mailed out together


If you have any other questions or things you need to clarify, do feel free to email anmeke@hotmail.com or find me on twitter @MELOSHINGO. You can also find